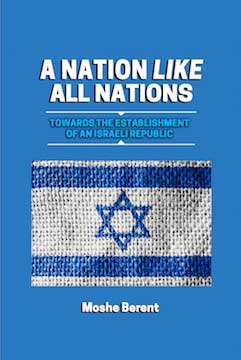 The mission of the Zionist movement was to work toward the normalization of Jewish existence: to become “a nation like all nations.” Israel, contrary to that aspiration, is not a normal nation-state, since according to the formal national ethos it belongs to the “Jewish people” and there is no recognized Israeli nation.

Dr. Berent asserts that the fusion of nationality and religion, together with the absence of a normal nation-state are the source of Israel’s basic problems and are responsible for Israel’s powerlessness to solve problems – i.e. the status of religion in public life; The relations between seculars and religious; the status of non-Jews, especially Arabs; the absence of a constitution; the inability to agree about borders, or to decide about peace and war. “A Nation Like All Nations: Towards the Establishment of an Israeli Republic” makes the case that a separation between nationality and religion, the recognition in the existence of an Israeli nation, and the establishment of Israel as a republic – as the State of the Israeli nation is a pre-condition for finding the solution of all of these problems.